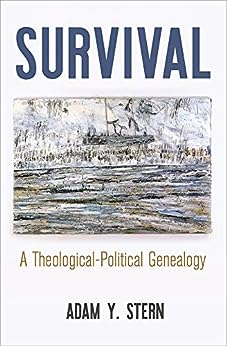 For a world mired in catastrophe, nothing could be more urgent than the question of survival. In this theoretically and methodologically groundbreaking book, Adam Y. Stern calls for a critical reevaluation of survival as a contemporary regime of representation.

In Survival, Stern asks what texts, what institutions, and what traditions have made survival a recognizable element of our current political vocabulary. The book begins by suggesting that the interpretive key lies in the discursive prominence of "Jewish survival." Yet the Jewish example, he argues, is less a marker of Jewish history than an index of Christianity's impact on the modern, secular, political imagination. With this inversion, the book repositions Jewish survival as the supplemental effect and mask of a more capacious political theology of Christian survival.

The argument proceeds by taking major moments in twentieth-century philosophy, theology, and political theory as occasions for collecting the scattered elements of survival's theological-political archive. Through readings of canonical texts by secular and Jewish thinkers—Hannah Arendt, Walter Benjamin, Franz Rosenzweig, and Sigmund Freud—Stern shows that survival belongs to a history of debates about the sovereignty and subjection of Christ's body. Interrogating survival as a rhetorical formation, the book intervenes in discussions about biopolitics, secularism, political theology, and the philosophy of religion.

This site uses cookies to ensure you get the best experience on our website.
More info Accept